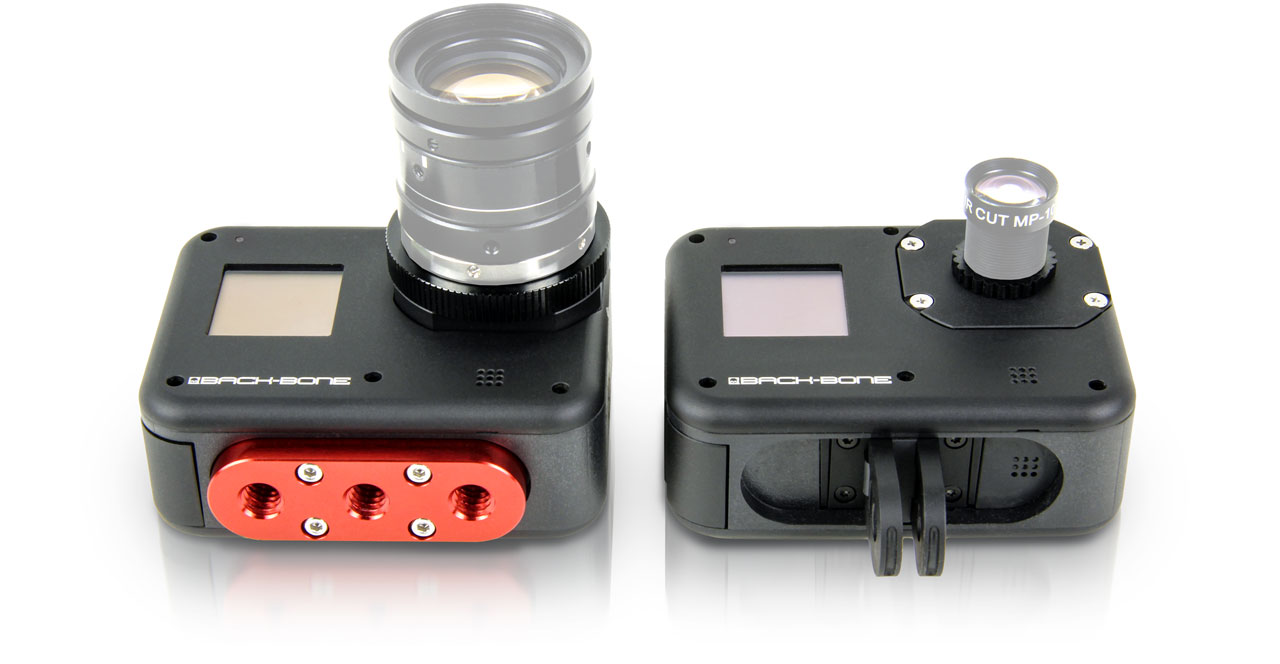 Since 2013 Back-Bone has created a series of professional modifications for GoPro and Sony RX0 II cameras that allow users to use their own choice of lens. Our modified cameras are capable of accepting almost any lens, from tiny M12 lenses, compact C-Mount lenses, professional SLR lenses and more. We chose the primary mount for our camera mods to be C-Mount which also allows the cameras to be attached to microscopes, telescopes and more. Built out of premium machined aluminum, our mods allow you to connect the largest selection of lenses possible on a camera.

Anything is Possible!The Hero cameras feature an awesome, crisp and sharp wide angle lens in order to capture all the action, but this may not always be the look you’re trying to achieve. With the option to change lenses filmmakers can easily get any look they want from this great camera – and you can use the original lens too!

Depth of Field and Manual Focus

Get the Look You WantTo achieve a more cinematic look many filmmakers wish to use a more shallow depth of field, creating a ‘bokeh’ or blurred background and foreground. By adding different lenses the user can now manually control the focus and F-stop to create the ideal look.

Zoom in on the ActionWith a manual zoom or telephoto lens attached you can achieve sharp detail from a great distance, and perform zooming during filming.

See in the DarkThe Ribcage mod kit has a removable IR cut filter, allowing the user the ability of filming with or without the filter. The benefit of this is, with the addition of an IR light source such as a battery powered IR LED panel, you get instant night vision! All those ghost hunters out there can film in complete darkness and still control multiple cameras with the WiFi remote! In addition, the Ribcage Hero4 mod can have up to 3 custom filters installed internally for custom bandwidth capture.

Use Your Old Lenses

How many of us have that old camera bag in the closet gathering dust?The optics and manual controls on most older SLR, Bolex and Super-8 camera lenses are excellent! Why not breathe new life into them by using them on your Ribcage? With the proper adapter ring you can attach almost any popular brand of manual lens to our mod, including Canon, Nikon, Pentax and more!

4K + Interchangeable Lenses for LessGet a 4K interchangeable lens camera capable of frame rates up to 240 fps (720p) for a mere fraction of the cost of any other camera with similar specifications. Use lenses you already have. Compatible with small GoPro 3-axis gimbals and accessories for stunning professional results. Add more cameras to your production for far less cost and sync them all to one remote or your smart device!